To the Greatest Heights: Facing Danger, Finding Humility, and Climbing a Mountain of Truth (Compact Disc) 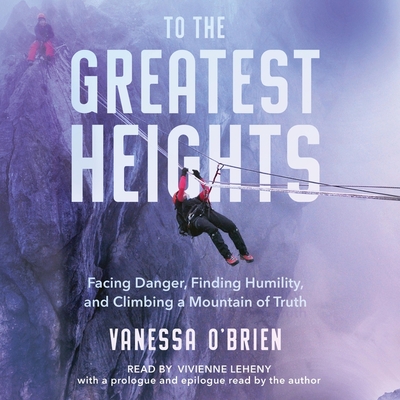 This riveting and uplifting memoir by Vanessa O'Brien, record-breaking American-British explorer, takes you on an unexpected journey to the top of the world's highest mountains. Long before she became the first American woman to summit K2 and the first British woman to return from its summit alive, Vanessa O'Brien was a feisty suburban Detroit teenager forced to reinvent her world in the wake of a devastating loss that destroyed her family. Making her own way in the world, Vanessa strove to reach her lofty ambitions. Soon, armed with an MBA and a wry sense of humor, she climbed the corporate ladder to great success, but after the 2009 economic meltdown, her career went into a tailspin. She searched for a new purpose and settled on an unlikely goal: climbing Mount Everest. When her first attempt ended in disaster, she trudged home, humbled but wiser. Two years later, she made it to the top of the world. And then she kept going. Grounded by a cadre of wise-cracking friends and an inimitable British spouse, Vanessa held her own in the intensely competitive world of mountaineering, summiting the highest peak on every continent, and skiing the last degree to the North and South Poles. She set new speed records for the Seven Summits, receiving a Guinness World Record and the Explorers Grand Slam, and finally made peace with her traumatic past. During her attempt on K2, she very nearly gave up. But on the "savage mountain," which kills one out of every four climbers who summit, Vanessa evolved from an adventurer out to challenge herself to an explorer with a high-altitude perspective on a changing world--and a new call to share her knowledge and passion across the globe. Told with heart and humor, Vanessa's journey from suburban Detroit to Everest's Death Zone to the summit of K2 and beyond, is a transformative story of resilience, higher purpose, and the courage to overcome any obstacle.
Back to top