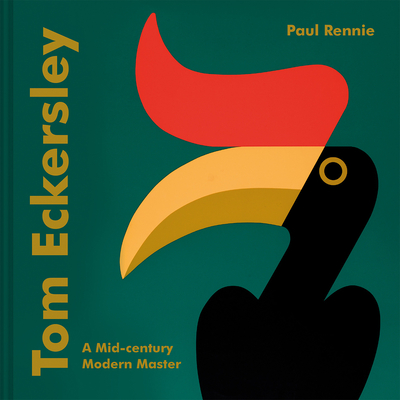 An overview of the work of 20th-century graphic design icon Tom Eckersley – packed with hundreds of his instantly recognisable designs.

From iconic posters for the Post Office and London Transport to designs for brands such as Guinness, this richly illustrated book explores the work of influential British poster artist and design teacher Tom Eckersley (1914–1997).

Part of the 'outsider' generation that transformed graphic design in Britain in the mid-century era, Eckersley’s instantly recognisable posters have become true icons of 20th-century style. Here, design writer and former Eckersley archivist Paul Rennie gives a fascinating exploration of Eckersley’s life and work, from his Northern upbringing and early career, through pioneering work during the Second World War, to his central role in mid-century graphic design in the decades that followed.

Over 200 designs from throughout Eckersley’s career are featured. Made in his signature style combining bold, bright colours and flat graphic shapes, there are designs for clients such as the BBC, British Rail, Keep Britain Tidy, Gillette, BP and Shell.

The book also examines Eckersley’s position at the forefront of the explosion of print culture in the 20th century, how he helped to transform design education in Britain, and the lasting legacy he left behind.

A celebration of a true mid-century modern master, this is the first book on Tom Eckersley of its kind and will appeal to anyone interested in graphic design and visual communication.

Paul Rennie is subject leader in context of Graphic Design Communication at Central Saint Martins. He is the author of Modern British Posters and runs Rennies Seaside Modern in Folkestone, Kent, a shop that specialises in British 20th-century art and design.

‘With designs dating from the 1930s to the 1980s, it is as much a picture of a changing Britain … as a song of praise to Eckersley’s ticklish wit and visual ingenuity’

‘A fascinating exploration of Eckersley’s life and work’

—Daily Mail and MailOnline
Back to top