Show Time: The 50 Most Influential Exhibitions of Contemporary Art (Hardcover) 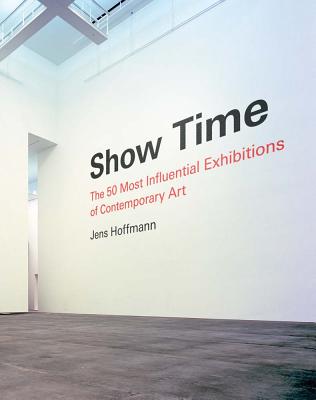 This monumental new book explores the recent history of exhibition-making, looking at the radical shifts that have taken place in the practice of curating contemporary art over the last 20 years. Tracing a history of curating through its most innovative shows, renowned curator Jens Hoffmann selects the 50 key exhibitions that have most significantly shaped the practice of both artists and curators. Chosen from the plethora of exhibitions, biennials and art events that have sprung up across the world since the 1990s, each exhibition reviewed here has triggered profound changes in curatorial practice, and reanimated the potential of contemporary art. The book includes an international roster of curators, and exhibition venues that span the globe, from the USA, Mexico, Brazil and South Africa to France, Germany, the Netherlands, Turkey and Spain. It is comprised of nine themed sections, including: "New Lands" (on shows such as Magiciens de la Terre, The Short Century and After the Wall); "Biennial Years" (which documents influential biennials such as the Documentas 10, 11, 13] and the Berlin and S o Paulo Biennials); "New Forms" (including experiments in exhibition-making such as Do It and NowHere); "Others Everywhere" (on 'identity politics' shows such as In a Different Light, Phantom Sightings and the 1993 Whitney Biennial); "Tomorrow's Talents Today" (on influential group exhibitions of emerging artists such as Helter Skelter and Sensation); and "History" (on historical surveys such as Inside the Visible, Global Conceptualism and WACK ). A bold proposition for the future of exhibition culture as well as a means of making the recent past accessible, Show Time is essential reading for any student of curating or museum studies, for professional curators and for all those interested in one of today's most dynamic forms of cultural production. Jens Hoffmann is an exhibition maker and writer based in New York. He is Deputy Director and Head of Exhibitions and Public Programs at The Jewish Museum, New York. He has curated and co-curated a number of large-scale exhibitions, including the 2nd San Juan Triennial (2009), the 12th Istanbul Biennial (2011) and the 9th Shanghai Biennial (2012).
Back to top