A Kitchen in the Corner of the House (Paperback) 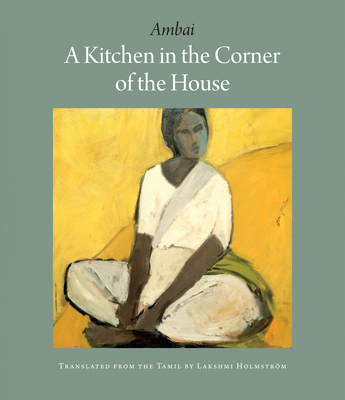 By AMBAI, Lakshmi Holmström (Translated by)
$20.00
Email or call for price.

A Kitchen in the Corner of the House collects twenty-five gem-like stories on motherhood, sexuality, and the body from the innovative and perceptive Tamil writer Ambai.

In A Kitchen in the Corner of the House, Ambai's narrators are daring and courageous, stretching and reinventing their homes, marriages, and worlds. With each story, her expansive voice confronts the construction of gender in Tamil literature. Piecing together letters, journal entries, and notes, Ambai weaves themes of both self-liberation and confinement into her writing. Her transfixing stories often meditate on motherhood, sexuality, and the liberating, and at times inhibiting, contours of the body.

C.S. Lakshmi, writing under the pseudonym of Ambai, is a feminist Tamil writer. She was born in 1944 in Tamil Nadu, and grew up in Bangalore and Mumbai. Her works include In a Forest, A Deer, Fish in a Dwindling Lake, A Meeting on the Andheri Overbridge, The Purple Sea, and A Night with a Black Spider. Her short stories portray the reality of women's lives, communicating their silence through words. She has worked on research projects such as: The Face Behind the Mask: Women in Tamil Literature. In 1988, Lakshmi founded SPARROW (Sound and Picture Archives for Research on Women) a non-governmental organization for documenting and archiving the work of female writers and artists. About the translator: Lakshmi Holmström translated short stories, novels, and poetry by the major contemporary writers in Tamil. Her most recent books are Fish in a Dwindling Lake by Ambai (2012); A Second Sunrise, poems by Cheran; Wild Girls, Wicked Words, a translation of poems by four Tamil women (2012). In 2007 she shared the Crossword-Hutch Award for her translation of Ambai's short stories, In a Forest, a Deer; and she received the Iyal Award from the Tamil Literary Garden, Canada, in 2008.

“Women and the seemingly infinite variety of restrictions they labor under are the focus of this wide-ranging story collection by the feminist Tamil writer Ambai. While the details are specific to India, particularly the south, the themes are universal — pregnancy, motherhood, domestic labor, politics, playing second fiddle to men, even (as in the title story) inconvenient architecture.” — Alison McCulloch, The New York Times

"I am astonished and moved by the deep wisdom of these stories, the clear-eyed tenderness and humor. Ambai is an explicitly feminist author, concerned with the lives of women, yet her expansive stories never feel didactic, just true." — Shruti Swamy, Electric Literature

"Ambai's stories explore the nuances of personal relationships, complex networks of emotions, and mingle themselves insightfully." - The Telegraph


"A Kitchen in the Corner of the House, translated by Lakshmi Holmström, by Ambai — pen-name of the Tamil author-activist C.S. Lakshmi — introduced me to a South Indian Alice Munro or Katherine Mansfield." — Spectator

"Ambai's stories...are boldly experimental, pointing to the real source of the best Indian fiction in the vernacular languages. She makes use of polyphony, fragmentation, and multiple persepctives, and her translator succeeds in capturing her technical virtuosity." - Times Literary Supplement

"Unglossed and unrepentant, (Ambai's stories) range over rakshasis and the Ramayana, over the film music of S.D. Burman and the Hindi songs of Pankaj Mullick; they dip into the intricacies of Carnatic singing ... Ambai’s style is efficient and fluid, with a quick poetry about it that gracefully lays the world down ... A Kitchen in the Corner of the House bodies forth a full roster of psychologically rich characters, glittering and wearied souls that breathe upon the page like the last flickering light of a candle. At the end of the collection, you’re left with the impression that Ambai is a dreamer of imperfect dreams, and a writer of perfect sorrows." — 3AM Magazine

"Ambai has created an inspiring collection of female characters who study and have sex. Some wish to be mothers, some do not. These women do not merely long for existence beyond their husbands and brothers and fathers; they achieve that freedom. Holmström’s translation emphasizes the energy Ambai must have included in the original Tamil, and she also manages to bring the sounds of Tamil to an English-speaking reader." — The London Magazine

"Ambai's short stories place experiences in a shared space and invite us to evaluate life as we know it...They shatter the narrow confines of a perceiving mind that makes everything its own and instead spread toward a wide horizon. " — Perumal Murugan

"Ambai brings to bear upon her tales the weight of her knowledge of the mythic, literary, and Puranic...A felicity of language and the easy flow of words make the translation a pleasure to read." - The Hindu

"Ambai excels in making physical movements parallel the progression in her stories...Lakshmi Holmstrom has been able to settle down so comfortably with the psyche of Ambai, that her translations of the latter's Tamil writings have the easy flow of the original." - Deccan Herald
Back to top