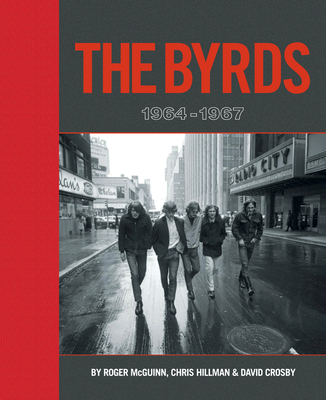 A new large-format 400-page collectible art book curated by the band’s three surviving founding members. When the Byrds released “Mr. Tambourine Man” in 1965, they introduced Bob Dylan’s songs to a new audience and launched a career that would make them among the most influential rock bands of all time. With their unmistakable harmonies and Roger McGuinn’s innovative 12-string Rickenbacker guitar, the Byrds never stopped experimenting. They incorporated folk, country, and jazz, influences into a fresh blend that helped define an era. “And not to be too shallow,” Tom Petty once wrote, “but they also were just the best-dressed band around. They had those great clothes and hairdos.” Now the band’s three surviving founding members—Roger McGuinn, Chris Hillman, and David Crosby—have come together to present The Byrds: 1964-1967, a large format tabletop book that offers a unique visual history of the group. Featuring more than 500 images from legendary photographers such as Henry Diltz, Barry Feinstein, Curt Gunther, Jim Marshall, Linda McCartney, Tom Gundelfinger O’Neal, and Guy Webster, the book also includes a detailed oral history from McGuinn, Hillman, and Crosby.

Scott B. Bomar is an award-winning writer, researcher, and music historian who has authored or co-authored six books, including How Sweet It Is (with Lamont Dozier), Every Night is Saturday Night (with Wanda Jackson), and Southbound: An Illustrated History of Southern Rock. He has earned two Grammy nominations in the category of Best Album Notes, and co-hosts the podcast, Songcraft: Spotlight on Songwriters. Scott was raised in Nashville and now lives in California, where he, his wife, and their two very large dogs split their time between Los Angeles and Idyllwild. Rock & Roll Hall of Famer Chris Hillman is a founding member of The Byrds, The Flying Burrito Brothers, Manassas, and The Desert Rose Band. He is, as Tom Petty once wrote, "the man who invented country rock." Roger McGuinn is a Grammy nominee and a member of the Rock & Roll Hall of Fame who best known as the lead vocalist and lead guitarist for The Byrds. David Crosby is a two-time Rock & Roll Hall of Fame inductee for his work with The Byrds and Crosby, Stills, Nash & Young. The Grammy winner is also a prolific solo artist who has released five albums since 2014.

"Those original Byrds really changed the world in that short time they were together." —Tom Petty