Cross the Tracks: A Memoir (Hardcover) 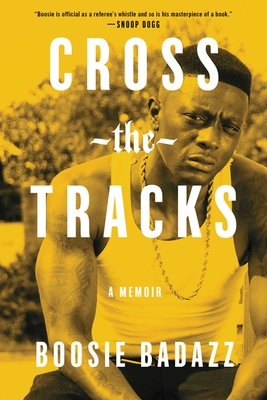 From one of rap’s most personal and evocative writers comes a stirring memoir about how Boosie Badazz, one of the industry’s most controversial figures, was able to overcome insurmountable odds to make his music dreams a reality.

A Baton Rouge native who began rapping at age fourteen, Boosie Badazz was already a cult hero in Louisiana when, in 2009, he was sentenced to two years in prison. The next year, he was indicted on even more serious charges, eventually landing him on Death Row. Prosecutors played Boosie’s music in the courtroom in an attempt to paint him as a thug with no chance of redemption. However, against overwhelming odds and the backdrop of a social media campaign to #FreeBoosie, he was freed in March of 2014 with a rare second chance to make his music dreams come true.

In this evocative and compelling memoir, Boosie explores the relationship between his life on the streets with his ceaseless tear through the rap industry. From near-death experiences to a ruthless bout with kidney cancer to a life-threatening diabetes diagnosis, Boosie has overcome remarkable challenges to make a name for himself as one of rap’s most influential voices. A redemptive story with an urgent voice, Cross the Tracks is the survival tale of a man who wasn’t sure he would live to see another day...but who rose from the ashes to change the rap industry forever.

"Boosie is official as a referee’s whistle and so is his masterpiece of a book.” –Snoop Dogg

"As someone who has spent countless hours interviewing Boosie, I was amazed at how much I learned about him from reading this book. This is a truly personal look into the mind and heart of not only a rapper, but a father, a friend, and a man.  A truly great read."—DJ Vlad, CEO, VladTV

“Boosie’s book is as real as the legend himself. You have to read it to believe it.”—Webbie