Areli Is a Dreamer: A True Story by Areli Morales, a DACA Recipient (Hardcover) 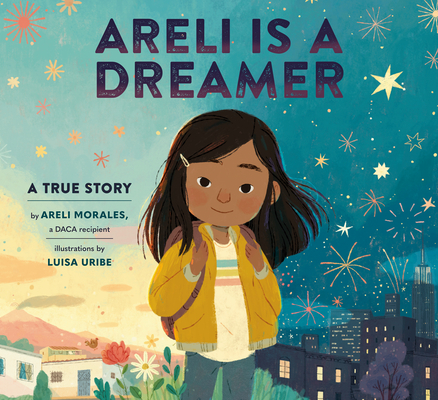 In the first picture book written by a DACA Dreamer, Areli Morales tells her own powerful and vibrant immigration story.

When Areli was just a baby, her mama and papa moved from Mexico to New York with her brother, Alex, to make a better life for the family--and when she was in kindergarten, they sent for her, too.

Everything in New York was different. Gone were the Saturdays at Abuela’s house, filled with cousins and sunshine. Instead, things were busy and fast and noisy. Areli’s limited English came out wrong, and schoolmates accused her of being illegal. But with time, America became her home. And she saw it as a land of opportunity, where millions of immigrants who came before her paved their own paths. She knew she would, too.

This is a moving story--one that resonates with millions of immigrants who make up the fabric of our country--about one girl living in two worlds, a girl whose DACA application was eventually approved and who is now living her American dream.

The Deferred Action for Childhood Arrivals (DACA) is an immigration policy that has provided relief to thousands of undocumented children, referred to as “Dreamers,” who came to the United States as children and call this country home.

Areli Morales Romero was born in Puebla, Mexico, but was raised in New York City. She is a DACA recipient, and Areli Is a Dreamer is her debut children's book. A graduate of CUNY-Brooklyn College with a bachelor's degree in childhood bilingual education, she currently works as a substitute teacher. One day, Areli hopes to have her own classroom, where she can teach children to value the power of storytelling and empower them to share their own stories. She lives in Brooklyn, New York, with her family.

Luisa Uribe was awarded the Society of Illustrators Dilys Evans Founder's Award for The Vast Wonder of the World by Melina Mangal. She also illustrated Your Name Is a Song by Jamilah Thompkins-Bigelow, which received a starred review from Kirkus Reviews, describing her work as "dynamic." She lives in Bogotá, Colombia, with her partner and two cats.

“This book could be used in a social science class highlighting Areli’s capacity to adapt and thrive as she navigates her new environment. It contains an author’s note addressing the fragility of the DACA program and back matter with a glossary defining the Spanish language terms in the story…A moving biographical picture book.” —School Library Journal