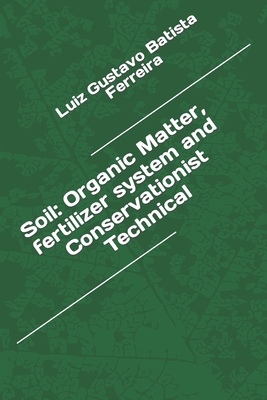 Backordered
(This item is non-returnable.)

Organic matter plays a fundamental role in every component of the production system: In soil physics: Organic matter is a cementing agent for soil particles, mainly clay (remembering that the soil is basically composed of sand, silt and clay). Organic matter benefits soil structure by forming larger aggregates, benefiting root development of cultivated plants and improving water and nutrient retention;In Soil Chemistry: Organic matter plays a crucial role in soil chemistry, especially in Brazilian soils, which are mostly tropical and highly weathered, with a 1: 1 mineralogical constitution and have low negative charges. Organic matter represents more than 70 % of CEC (cation exchange capacity) of Brazilian soils by the dissociation of phenolic and carboxylic groups from organic matter;In soil biology: Organic matter is relevant for soil biology, as it contributes to the development of soil microbiota, as well as favoring soil enzymatic activity;Reduces soil pollution: complex organic matter toxic to cultivated plants such as exchangeable aluminum;Contributes to soil conservation: Utilization of waste such as mulch contributes to soil erosion control (wind or water) and increases the organic matter content;Prevents phosphor adsorption in soils: One of the main problems with soil fertility in Brazil is phosphorus adsorption, which becomes unavailable to cultivated plants. In no till or Direct Planting System, the organic matter content is high and, as a result, the organic compounds of the organic matter complex the oxides of Fe and Al, preventing the adsorption of P in the soil;Soil organic matter may vary by external agents in content. Are they: Time: Bayer and Mielczuck (1999) concluded that years of cultivation reduce the organic matter content;Climate: For Burke et al. (1989) the higher the rainfall rates, the higher the organic matter content. This is one of the reasons why the southern region of Parana state (Brazil) has higher content of organic matter compared to the north of the state. Another reason is that in colder regions (lower average temperature), the soils have a significant capacity to carry plant residues, establishing greater recalcitrance of organic matter (BAYER; MIELNICZUC, 2008);Vegetation: Testa el al. (1992) state that soils with vegetation cover have higher organic matter content than uncovered soils. In natural vegetation (woods) the organic matter content is always higher in relation to the cultivated area, once only natural forests have higher levels of organic matter than quality no till; Topography: The higher the slope, the lower the organic carbon content of the site;Soil Type: Predominantly clayey soils have higher organic matter content than medium textured soils;Crop systems (Conventional or Conservationist): Perhaps the main variable in organic matter content. Basically, conventional management of soil fertility has lower levels of organic matter, whereas in no till (quality) has higher content of organic matter. Until the 1950s, the production of Brazilian agriculture depended almost exclusively on the natural fertility of soils, which is mostly low due to the high acidity and the presence of toxic trivalent aluminum contents for the main crops. In addition to these problems, we also highlight the low availability of macronutrients (N, P, K, Ca, Mg and S), micronutrients such as Zn and Cu, low CEC and, P fixation in tropical regions, which makes it unavailable for cultures since P is adsorbed by electrostatic or covalent mechanisms (ALCARDE et al. 1991). Conservationist agriculture is responsible to appropriate physical, biological and chemical agricultural conditions for crops to express their genetic productive potential (ZACANARO; KAPPES, 2014.
Back to top