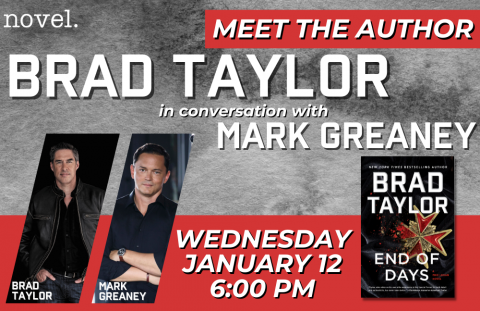 to celebrate the launch of his new novel

When a paragliding trip over the picturesque mountains of Switzerland results in the brutal murder of the former head of Israeli intelligence, Mossad brings in terrorist hunters Aaron and Shoshana to investigate. But they'll need help to find out who was behind the attack and what they're planning next. Luckily, Aaron and Shoshana know exactly who to call.

Taskforce operators Pike Logan and Jennifer Cahill have been trapped in Charleston, South Carolina during COVID-19, so when Aaron and Shoshana show up on their doorstep with Israeli passports and a new mission, they jump at the chance to assist their friends. Some suspect that Keta'ib Hezbollah, an Iranian-funded militia group operating in Iraq, might be responsible for the "accidental" deaths of key members of the American and Israeli governments. But something isn't adding up, and Pike, Jennifer, and the two Mossad operators are determined to find the real assassins before more people are cut down.

As they stumble upon the trail of a serial killer loose on the streets of Rome connected to the deaths and follow evidence leading to the exalted Knights of Malta, they must wade deep into the contentious religious and political fractures of Israel and the greater Middle East. It's a dangerous world where fanatics and legitimate organizations exist side by side, and it's up to the Taskforce to determine who is really pulling the strings. What they find could have disastrous consequences not only for them, but for the entire world...

Brad Taylor, Lieutenant Colonel (Ret.), is a 21-year veteran of the U.S. Army Infantry and Special Forces, including eight years with the 1 st Special Forces Operational Detachment – Delta, popularly known as Delta Force, where he commanded multiple troops and a squadron. Taylor retired in 2010 after serving more than two decades and participating in Operation Enduring Freedom and Operation Iraqi Freedom, as well as classified operations in Afghanistan and around the globe. His final military post was as Assistant Professor of Military Science at The Citadel. He holds a Master’s of Science in Defense Analysis from the Naval Postgraduate School, with a concentration in Irregular Warfare. In 2011, Taylor published his debut novel, One Rough Man, which was an immediate success and launched the Pike Logan series. Now with 16 installments and more than 3 million copies sold, the series has consistently hit the New York Times bestseller list. When not writing, Taylor serves as a security consultant on asymmetric threats for various agencies. He lives in Charleston, South Carolina, with his wife and two daughters.

#1 NYT bestselling author Mark Greaney’s debut international thriller, THE GRAY MAN, was published in 2009 and became a national bestseller and a highly sought-after Hollywood property. Ten subsequent Gray Man novels have been released to date, including his latest, RELENTLESS. Mark is also the #1 New York Times bestselling author or coauthor of seven Tom Clancy novels, including his most recent TOM CLANCY TRUE FAITH AND ALLEGIANCE. He collaborated with Tom Clancy on three Jack Ryan novels before Tom’s death in 2013. RED METAL, a military thriller written by Mark Greaney and Lt Col Hunter R. Rawlings, USMC, became a New York Times bestseller in 2009. Mark’s books are published in several languages and are also available as audiobooks. A feature film adaptation of THE GRAY MAN is in production at Netflix, with Ryan Gosling in the title role. A feature film adaptation of Mark’s scripted audio play Armored, is in development with Michael Bay and Erwin Stoff to produce. In his research for the Gray Man and Jack Ryan novels he has traveled to dozens of countries, visited the Pentagon, military bases, and many Washington, D.C. Intelligence agencies, and trained alongside military and law enforcement in the use of firearms, battlefield medicine, and close-range combative tactics. Mark lives in Memphis, Tennessee with his wife, his three stepchildren, and his three dogs, Lobo, Ziggy, and Winston.