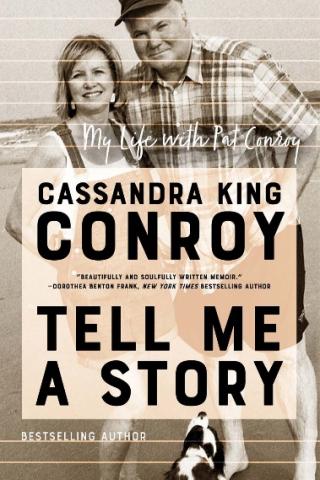 Novel welcomes Cassandra King Conroy in conversation with Valerie Calhoun of FOX13 Memphis as they discuss her new memoir Tell Me a Story: My Life with Pat Conroy.

Bestselling author Cassandra King Conroy considers her life and the man she shared it with, paying tribute to her husband, Pat Conroy, the legendary figures of modern Southern literature.

Cassandra King was leading a quiet life as a professor, divorced "Sunday wife" of a preacher, and debut novelist when she met Pat Conroy.

Their friendship bloomed into a tentative, long-distance relationship. Pat and Cassandra ultimately married, partly because Pat hated the commute from coastal South Carolina to her native Alabama. It was a union that would last eighteen years, until the beloved literary icon's death from pancreatic cancer in 2016.

In this poignant, intimate memoir, the woman he called King Ray looks back at her love affair with a natural-born storyteller whose lust for life was fueled by a passion for literature, food, and the Carolina Lowcountry that was his home. As she reflects on their relationship and the eighteen years they spent together, cut short by Pat's passing at seventy, Cassandra reveals how the marshlands of the South Carolina Lowcountry ultimately cast their spell on her, too, and how she came to understand the convivial, generous, funny, and wounded flesh-and-blood man beneath the legend--her husband, the original Prince of Tides.

Cassandra King is an award winning and bestselling novelist whose fiction has won the hearts of readers everywhere, especially in the American south. Often told in first person, her novels portray strong and memorable characters who struggle with the same timely issues and dilemmas that readers face in their own lives. Before becoming an author, she has taught creative writing on the college level, conducted corporate writing seminars, and worked as a human interest reporter. The widow of acclaimed author Pat Conroy, Cassandra resides in Beaufort, South Carolina, where she is honorary chair of the Pat Conroy Literary Center.

Tell Me a Story: My Life with Pat Conroy (Hardcover)