John Babb with Voices of the Dead: Battling the Yellow Fever Epidemic of 1878 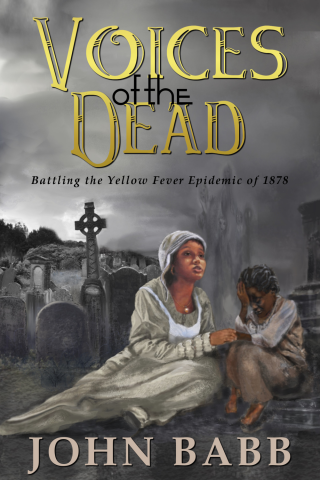 A big, sprawling novel for fans of James Michener... During four terror-filled months in 1878, a yellow fever epidemic in the Lower Mississippi Valley struck 154 towns and cities, killed over 20,000 people, and wiped entire families and businesses from the face of the earth. A determined band of volunteer heroes and heroines fought the virus despite their limited medical knowledge. A Creole nurse from New Orleans travels north to help, bringing with her a very special locket she inherited from her Haitian grandmother. An Irish chambermaid learns nursing and puts her life at risk trying to bring down her patients' fevers. A Jewish physician volunteers despite lacking immunity to the virus. A fisherman becomes one of the first black policemen in the South when the white force is decimated by the disease. Priests, sisters, reverends, rabbis, physicians, nurses, hearse drivers, gravediggers, retired military, an unashamed madam, a gambler... Some survived. Others paid the ultimate price. And only one person can hear the voices of the dead.

John Babb is a former Assistant Surgeon General as well as a retired rear admiral in the U.S. Public Health Service. His background in pharmacy and public health has allowed him to accurately portray some of the diseases, treatments, and primitive medical remedies, as well as curative folklore, as practiced by our ancestors. He makes a significant effort to be historically accurate in his writing. He lives in Collierville with his oil painter wife, Victoria.