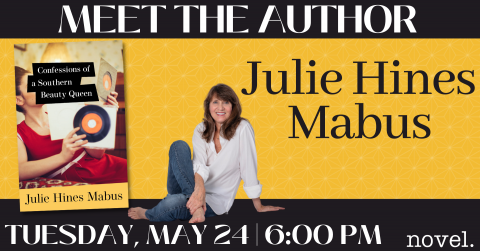 Confessions of a Southern Beauty Queen

In the late 1960s, Patsy Channing, a stunningly beautiful young woman, was suspended from the venerable Mississippi State College for Women for breach of conduct. The resulting scandal reached all the way to the Columbus courthouse, and the press ate it up.

But Patsy's story starts long before that, living with a preoccupied and troubled mother in Memphis, Tennessee. As Patsy grows up, she buries the memories of her unspeakable childhood trauma and is determined to have a normal life. Music becomes her ticket out and a vehicle for the one thing she covets most--a chance to be crowned Miss America.

In Confessions of a Southern Beauty Queen, Julie Hines Mabus provides a peek into that world--a world struggling through the civil rights movement, reeling from the death of JFK, and cutting loose with the musical innovations from Memphis and Detroit. Patsy develops a close friendship with a guitarist at Stax Recording Studio, giving her firsthand exposure to the early Memphis Soul Sound created by such greats as Otis Redding, Isaac Hayes, and Sam & Dave.

Confessions of a Southern Beauty Queen opens and closes with the end of Patsy's time at Mississippi State College for Women on that fateful spring morning in 1968 when she entered the Columbus courthouse. Patsy's story, marked with tragedy and triumph, mirrors that of a growing and evolving South, where change never comes easy.

Julie Hines Mabus is a fifth-generation Mississippian, educated at the University of Mississippi, majoring in mathematics, and at Columbia University with an MBA in finance. She practiced as a CPA over the years in Jackson and San Francisco. She is the mother of two beautiful and accomplished daughters and stepmother to some fifty of the Lost Boys of Sudan—African refugees who resettled in Mississippi in 2000.

She has been single since 2000 but spent time promoting adult literacy and childcare while the spouse of the governor of Mississippi during the 1988 until 1992. She also promoted women’s issues while he was ambassador to Saudi Arabia in the 1990s. Julie recently moved to Oxford, Mississippi, where she tutors college-level students in accounting and finance.

This book happened serendipitously, but after many years of working in myriad industries and professions, she has come to realize writing empowers her and makes her whole. The serendipity occurred when her close friend told her a harrowing story from her childhood. Julie’s only response was “I have to write about it. Someone has to write about it. Your story must be told.” And so she began.