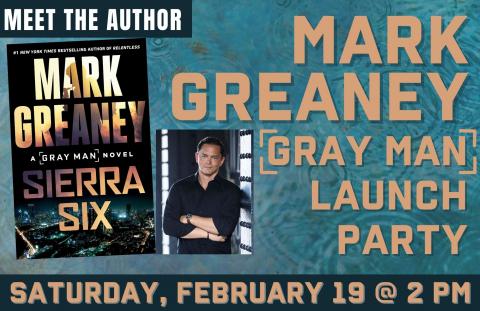 to celebrate the launch Gray Man #11

It's been years since the Gray Man's first mission, but the trouble's just getting started in the latest entry in the #1 New York Times bestselling series.

Before he was the Gray Man, Court Gentry was Sierra Six, the junior member of a CIA action team.

In their first mission they took out a terrorist leader, at a terrible price. Years have passed. The Gray Man is on a simple mission when he sees a ghost: the long-dead terrorist, but he's remarkably energetic for a dead man.

A decade of time hasn't changed the Gray Man. He isn't one to leave a job unfinished or a blood debt unpaid.

#1 NYT bestselling author Mark Greaney’s debut international thriller, THE GRAY MAN, was published in 2009 and became a national bestseller and a highly sought-after Hollywood property. Ten subsequent Gray Man novels have been released to date, including his latest, RELENTLESS. Mark is also the #1 New York Times bestselling author or coauthor of seven Tom Clancy novels, including his most recent TOM CLANCY TRUE FAITH AND ALLEGIANCE. He collaborated with Tom Clancy on three Jack Ryan novels before Tom’s death in 2013. RED METAL, a military thriller written by Mark Greaney and Lt Col Hunter R. Rawlings, USMC, became a New York Times bestseller in 2009. Mark’s books are published in several languages and are also available as audiobooks. A feature film adaptation of THE GRAY MAN is in production at Netflix, with Ryan Gosling in the title role. A feature film adaptation of Mark’s scripted audio play Armored, is in development with Michael Bay and Erwin Stoff to produce. In his research for the Gray Man and Jack Ryan novels he has traveled to dozens of countries, visited the Pentagon, military bases, and many Washington, D.C. Intelligence agencies, and trained alongside military and law enforcement in the use of firearms, battlefield medicine, and close-range combative tactics. Mark lives in Memphis, Tennessee with his wife, his three stepchildren, and his three dogs, Lobo, Ziggy, and Winston.