A Novel Book Club: All the Birds in the Sky 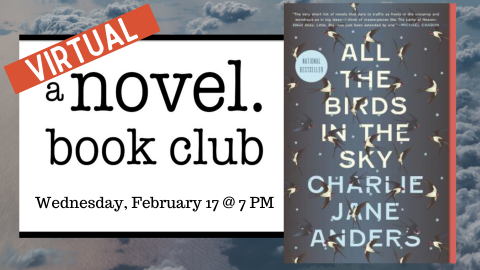 Join your pals at Novel on Wednesday, February 17 at 7 p.m. for A Novel Book Club on Zoom!

(Book club members get 10% off the price of this month's book--be sure to ask for your discount! If you don't feel comfortable coming in the store just yet, we have a quantity in stock that you can order on novelmemphis.com or over the phone for delivery or curbside pickup! Title is automatically discounted when ordering online.)

You can register on Evenbrite here: https://www.eventbrite.com/e/a-novel-book-club-all-the-birds-in-the-sky-tickets-135393823571

You can purchase the book from Novel at a 10% book club discount below.

About the All the Birds in the Sky:

Winner of the 2017 Nebula Award for Best Novel

Finalist for the 2017 Hugo Award for Best Novel

“The book is full of quirkiness and playful detail...but there's an overwhelming depth and poignancy to its virtuoso ending.” —NPR

From the former editor-in-chief of io9.com, a stunning Nebula Award-winning and Hugo-shortlisted novel about the end of the world—and the beginning of our future.

An ancient society of witches and a hipster technological startup go to war in order to prevent the world from tearing itself apart. To further complicate things, each of the groups’ most promising followers (Patricia, a brilliant witch and Laurence, an engineering “wunderkind”) may just be in love with each other.

As the battle between magic and science wages in San Francisco against the backdrop of international chaos, Laurence and Patricia are forced to choose sides. But their choices will determine the fate of the planet and all mankind.

In a fashion unique to Charlie Jane Anders, All the Birds in the Sky offers a humorous and, at times, heart-breaking exploration of growing up extraordinary in world filled with cruelty, scientific ingenuity, and magic.

Charlie Jane Anders is the former editor-in-chief of io9.com, the popular Gawker Media site devoted to science fiction and fantasy. She is the author of the highly acclaimed science fiction novel, City in the Middle of the Night. Her debut novel, All the Birds in the Sky, won the Nebula Award for Best Novel and was a Hugo Award finalist. Her story, "Six Months, Three Days" won a Hugo Award. She has also had fiction published by McSweeney's, Lightspeed, and ZYZZYVA . Her journalism has appeared in Salon, the Wall Street Journal, Mother Jones, and many other outlets.

All the Birds in the Sky (Paperback)