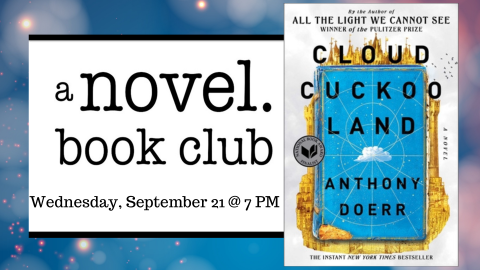 In person AND on Zoom!

We hope you'll join us in store for our September meeting of A Novel Book Club, or email kleache@novelmemphis.com for the Zoom link.

You can purchase your copy of CLOUD CUCKOO LAND at a 10% book club discount in store, or online using coupon code BOOKCLUB10.

On the New York Times bestseller list for over 20 weeks * A New York Times Notable Book * A Barack Obama Favorite * A National Book Award Finalist * Named a Best Book of the Year by Fresh Air, Time, Entertainment Weekly, Associated Press, and many more

“If you’re looking for a superb novel, look no further.” —The Washington Post

From the Pulitzer Prize–winning author of All the Light We Cannot See, comes the instant New York Times bestseller that is a “wildly inventive, a humane and uplifting book for adults that’s infused with the magic of childhood reading experiences” (The New York Times Book Review).

Among the most celebrated and beloved novels of recent times, Cloud Cuckoo Land is a triumph of imagination and compassion, a soaring story about children on the cusp of adulthood in worlds in peril, who find resilience, hope, and a book.

In the 15th century, an orphan named Anna lives inside the formidable walls of Constantinople. She learns to read, and in this ancient city, famous for its libraries, she finds what might be the last copy of a centuries-old book, the story of Aethon, who longs to be turned into a bird so that he can fly to a utopian paradise in the sky. Outside the walls is Omeir, a village boy, conscripted with his beloved oxen into the army that will lay siege to the city. His path and Anna’s will cross.

In the present day, in a library in Idaho, octogenarian Zeno rehearses children in a play adaptation of Aethon’s story, preserved against all odds through centuries. Tucked among the library shelves is a bomb, planted by a troubled, idealistic teenager, Seymour. This is another siege.

And in a not-so-distant future, on the interstellar ship Argos, Konstance is alone in a vault, copying on scraps of sacking the story of Aethon, told to her by her father.

Anna, Omeir, Seymour, Zeno, and Konstance are dreamers and outsiders whose lives are gloriously intertwined. Doerr’s dazzling imagination transports us to worlds so dramatic and immersive that we forget, for a time, our own.

Anthony Doerr is the author of Cloud Cuckoo Land, which was a finalist for the National Book Award, and All the Light We Cannot See, winner of the Pulitzer Prize, the Carnegie Medal, the Alex Award, and a #1 New York Times bestseller. He is also the author of the story collections Memory Wall and The Shell Collector, the novel About Grace, and the memoir Four Seasons in Rome. He has won five O. Henry Prizes, the Rome Prize, the New York Public Library’s Young Lions Award, the National Magazine Award for fiction, a Guggenheim Fellowship, and the Story Prize. Born and raised in Cleveland, Ohio, Doerr lives in Boise, Idaho, with his wife and two sons.

*WINNER OF THE READING THE WEST BOOK AWARD*

*FINALIST FOR THE NATIONAL BOOK AWARD FOR FICTION*

“A magical (and hopeful) tale of humanity.”
—People

“As intimate as a bedtime story, a love letter to libraries and bibliophiles.”
—O Magazine

“A dazzling epic of love, war, and the joy of books.”
—The Guardian

“A novel of epic stature and ambition.”
—Buzzfeed

“[An] intricately braided story . . . [and] a stunning, mind-bending tale of survival and how closely we’re all connected.”
—Good Housekeeping

“A trip well worth taking with the inimitable Doerr.”
—Rob Merrill, Associated Press

“Of all our contemporary fiction writers, Anthony Doerr is the one whose novels seem to be the purest response to the primal request: tell me a story. . . . [Cloud Cuckoo Land] transports us far above the stars, and down into the mud. It dazzles, and disturbs. And I for one wanted Doerr’s vast and overwhelming story to last much, much longer.”
—Maureen Corrigan, Fresh Air

“Sprawling and ambitious and imaginative. . . .  [Doerr] is a writer with the rare ability to achieve the universal and the specific simultaneously. His stories, both vast and intimate, are dazzling, sometimes dizzying in their scope. . . . [Cloud Cuckoo Land] is unlike anything you’ve ever read.”
—Samantha Schoech, San Francisco Chronicle

“Readers will come away from it with a greater appreciation for those invisible qualities that have bound human life across the ages—the love of a good story and the joy of returning home.”
—Samantha Spengler, Wired

“There’s no book like Cloud Cuckoo Land… the story is mesmerizing, and the carefully-crafted tapestry of themes pulls characters and time periods together into an incandescent whole—tempting the reader to start over as soon as the book is finished.”
—Diana Furchtgott-Roth, Forbes

"Doerr's prose casts a spell; his world-building is both defiant and tender, a virtuosic meditation on the alchemy of books. Come for the magician's tricks, stay for the exquisite storytelling."
—Hamilton Cain, Star Tribune

“The greatest joy in [Cloud Cuckoo Land] comes from watching the pieces snap into place. It is an epic of the quietest kind, whispering across 600 years in a voice no louder than a librarian's.”
—Jason Sheehan, NPR.org

“Doerr’s creation lifts off quickly, soars, and then, like the various wildfowl wheeling through the story, lands with practiced finesse. . . . Fueled by deep imagination and insistent compassion, Doerr weaves together his storylines with brisk pacing that never feels rushed.”
—Erin Douglass, Christian Science Monitor

“There is a kind of book a seasoned writer produces after a big success: large-hearted, wide in scope and joyous. Following his Pulitzer winner All the Light We Cannot See, Anthony Doerr’s Cloud Cuckoo Land is a deep lungful of fresh air–and a gift of a novel.”
—Elizabeth Knox, The Guardian

“In a big fiction year . . . Cloud Cuckoo Land stands out. . . . Doerr’s characters are astoundingly resilient, suggesting that we may yet save ourselves, with literature an essential tool.”
—Hamilton Cain, Boston Globe