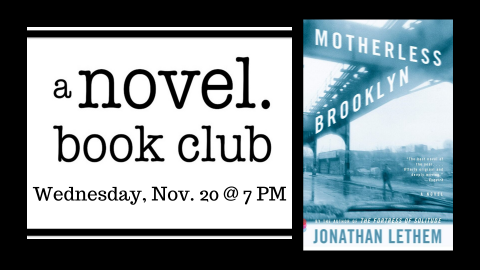 Join your pals at Novel every 3rd Wednesday of the month at 7 p.m. for A Novel Book Club. Our monthly picks will encompass a wide variety of genres, interests, and reading styles, with book club members involved in choosing future selections. Unlike a lot of book clubs that are spawned from a group of friends, we are a group of friends spawned from a book club. We really hope to see you at the next meeting! (Book club members get 10% off the price of this month's book--ask for your discount at the register!)

From America's most inventive novelist, Jonathan Lethem, comes this compelling and compulsive riff on the classic detective novel.

Lionel Essrog is Brooklyn's very own self-appointed Human Freakshow, an orphan whose Tourettic impulses drive him to bark, count, and rip apart our language in startling and original ways. Together with three veterans of the St. Vincent's Home for Boys, he works for small-time mobster Frank Minna's limo service cum detective agency. Life without Frank Minna, the charismatic King of Brooklyn, would be unimaginable, so who cares if the tasks he sets them are, well, not exactly legal. But when Frank is fatally stabbed, one of Lionel's colleagues lands in jail, the other two vie for his position, and the victim's widow skips town. Lionel's world is suddenly topsy-turvy, and this outcast who has trouble even conversing attempts to untangle the threads of the case while trying to keep the words straight in his head. Motherless Brooklyn is a brilliantly original homage to the classic detective novel by one of the most acclaimed writers of his generation.

Motherless Brooklyn has been adapted to film by Edward Norton and will open in theaters November 2019.

Jonathan Lethem is the author of six novels, including the best sellers The Fortress of Solitude, which was a New York Times Book Review Editors' Choice for one of the best books of 2003, and Motherless Brooklyn, which won the National Book Critics Circle Award and was named novel of the year by Esquire, McSweeney's, Tin House, The New York TImes, the Paris Review, and a variety of other periodicals and anthologies. He lives in Brooklyn, New York, and in Maine.