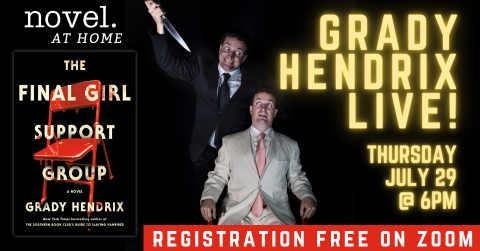 Please have a seat, and you'll find coffee in the back. The rules of this group therapy session are no cross-talk, anything said in group is confidential, and never assume a masked killer is dead until their body has been fed through a wood chipper, burned to ash, or dissolved in acid. At tonight's session, author Grady Hendrix will present the traumatic history of the final girl to support the release of his book, The Final Girl Support Group. He'll be discussing telephone killers, deadly Olympic training camps, deadly summer camps, deadly sleepaway camps, and female bodybuilders who have taken so many steroids that they've turned into male serial killers. Don't blame him. Blame the books.

And as an exclusive offer for Novel customers, pre-order The Final Girl Support Group by Monday, July 5 and Grady Hendrix will sign a personalized book plate for you! More information here.

In horror movies, the final girls are the ones left standing when the credits roll. They made it through the worst night of their lives…but what happens after?

Like his bestselling novel The Southern Book Club’s Guide to Slaying Vampires, Grady Hendrix’s latest is a fast-paced, frightening, and wickedly humorous thriller. From chain saws to summer camp slayers, The Final Girl Support Group pays tribute to and slyly subverts our most popular horror films—movies like The Texas Chainsaw Massacre, A Nightmare on Elm Street, and Scream.

Lynette Tarkington is a real-life final girl who survived a massacre. For more than a decade, she’s been meeting with five other final girls and their therapist in a support group for those who survived the unthinkable, working to put their lives back together. Then one woman misses a meeting, and their worst fears are realized—someone knows about the group and is determined to rip their lives apart again, piece by piece.

But the thing about final girls is that no matter how bad the odds, how dark the night, how sharp the knife, they will never, ever give up.

Grady Hendrix is the New York Times-bestselling author of The Southern Book Club's Guide to Slaying Vampires, My Best Friend's Exorcism, We Sold Our Souls, and Horrorstör. His history of the horror paperback boom of the '70s and '80s, Paperbacks from Hell, won the Stoker Award for Outstanding Achievement in Nonfiction. His latest novel is The Final Girl Support Group (out July 13, 2021) and he is also the screenwriter of Mohawk (2017) and Satanic Panic (2019). You can learn more useless facts about him at www.gradyhendrix.com