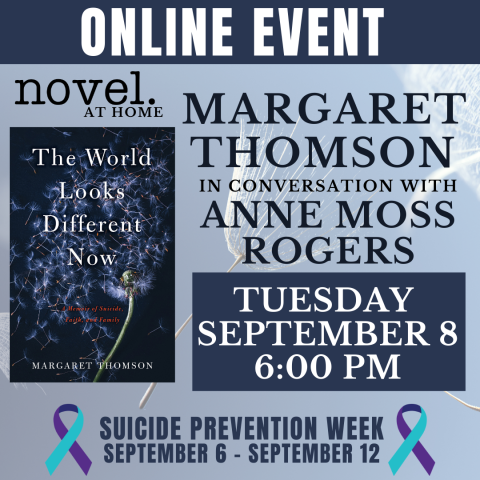 You can find a recording of this event and others on the Novel Events YouTube channel here:

THE WORLD LOOKS DIFFERENT NOW: A MEMOIR OF SUICIDE , FAITH AND FAMILY

On a glorious, if blisteringly hot, Saturday in August 2010, Margaret Thomson's world is suddenly shattered by the incomprehensible news that her twenty-two-year-old son, a medic in the army, has taken his life.

In a deep state of shock, Thomson and her husband immediately travel to Fort Bragg, North Carolina, where their son Kieran was stationed, in an effort to assist their daughter-in-law. Upon their arrival, though, the couple find themselves plunged into a labyrinthine and, at times, seemingly bizarre world of military rules and regulations.

Eventually, after the funeral and the memorial services are over, an even more challenging journey--emotionally as well as geographically--ensues, especially for Margaret, who, as a former journalist, is determined to find out more about the circumstances surrounding her son's death, no matter how high the cost.

As she enters her second year of grieving, Thomson receives an unexpected invitation from an unlikely source--the army, which she's often blamed in many ways, whether fairly or not, for her son's death. Seizing upon this opportunity, Thomson finds that her perspective is changed--literally--and that as a result the world does indeed look different now.

The World Looks Different Now takes readers behind the statistics and into the private world of a family whose lives are forever changed following the suicide of the family’s older son less than three months before he was due to deploy to Afghanistan.

A journalist as well as a grieving mother, author Margaret Thomson instinctively turns to writing during the weeks, months, and even years following her son’s death in an effort to make sense out of a seemingly senseless act that she never dreamed could happen. In The World Looks Different Now, she chronicles the grueling journey she and her husband, along with their surviving son, are forced to embark upon as they move toward eventual―if only partial―healing. Poignant and insightful, this memoir will help those who’s suffered a major loss to better understand the need to grieve at one’s own pace, as well as in one’s own individual way.

Margaret Thomson is a journalist and television producer who’s reported on a variety of subjects, from Middle East politics to the British royal family. As a radio correspondent for ABC News, she was the first American broadcast journalist to report the end of the Falklands War in May 1982; several years later she became the first radio correspondent to report on the AIDS epidemic in Africa. Upon returning to the United States in 1992, she taught journalism and television production at the University of Memphis. In 1993, she worked as a production associate on the HBO documentary The Trial of James Earl Ray. Thomson continues to write for print and online publications. In 2016, she and her husband Tim relocated from Memphis to Franklin, Tennessee. Their son Matt, a recent graduate of the United States Merchant Marine Academy, visits frequently from his job in the shipping industry.

Anne Moss is her first name. It’s a southern thing. She is TEDx storyteller, the 2019 YWCA Pat Asch Fellow for social justice, author of the award-winning book, Diary of a Broken Mind, and an Emotionally Naked® motivational speaker who helps people foster a culture of connection to prevent suicide, reduce substance misuse, and find life after loss.

Despite her family’s best efforts, Anne Moss’s 20-year-old son Charles died by suicide on June 5, 2015, after many years of struggle with anxiety, depression, and ultimately addiction. Anne Moss started a blog, EmotionallyNaked.com, and chronicled her family’s tragedy in a newspaper article that went viral.

After receiving a message from a young lady who wrote that one of her blog posts saved her life, Anne Moss sold her digital marketing business and followed her purpose of preventing suicide and reducing the stigma of addiction and mental illness.

She has been featured in the New York Times and was the first suicide loss survivor ever invited to speak at the National Institute of Mental Health (NIMH).

Originally from North Carolina, she graduated from UNC-Chapel Hill and lives in Richmond, Virginia, with her husband, Randy. They raised two sons, the late Charles Aubrey, 20, and Richard, 26, a filmmaker living his dream in LA. Charles’ dog, Andy is 13 and barks at babies in strollers as they walk by the front of the house.

CLICK HERE to purchase Anne Moss Rogers' book, Diary of a Broken Mind: A Mother's Story, A Son's Suicide, and the Haunting Lyrics He Left Behind.

The World Looks Different Now: A Memoir of Suicide, Faith, and Family (Paperback)