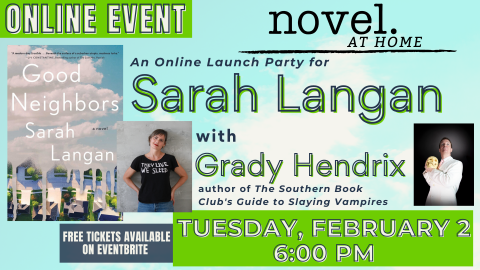 You can view a recording of this event here: https://youtu.be/NHWTy2BHHes

“A modern-day Crucible….Beneath the surface of a suburban utopia, madness lurks.” —Liv Constantine, bestselling author of The Last Mrs. Parrish

“A modern-day Crucible….Beneath the surface of a suburban utopia, madness lurks.” —Liv Constantine, bestselling author of THE LAST MRS. PARRISH

“Sarah Langan is a phenomenal talent with a wicked sense of wry humor. Good Neighbors knocked me out. Like Shirley Jackson, Langan’s work blends a bleak streak with an underlying sense of the humane that wrung my heart.” —Victor LaValle, author of THE CHANGELING

Celeste Ng’s enthralling dissection of suburbia meets Shirley Jackson’s creeping dread in this propulsive literary noir, when a sudden tragedy exposes the depths of deception and damage in a Long Island suburb—pitting neighbor against neighbor and putting one family in terrible danger.

Welcome to Maple Street, a picture-perfect slice of suburban Long Island, its residents bound by their children, their work, and their illusion of safety in a rapidly changing world.

Arlo Wilde, a gruff has-been rock star who’s got nothing to show for his fame but track marks, is always two steps behind the other dads. His wife, beautiful ex-pageant queen Gertie, feels socially ostracized and adrift. Spunky preteen Julie curses like a sailor and her kid brother Larry is called “Robot Boy” by the kids on the block.

Their next-door neighbor and Maple Street’s Queen Bee, Rhea Schroeder—a lonely community college professor repressing her own dark past—welcomes Gertie and family into the fold. Then, during one spritzer-fueled summer evening, the new best friends share too much, too soon.

As tensions mount, a sinkhole opens in a nearby park, and Rhea’s daughter Shelly falls inside. The search for Shelly brings a shocking accusation against the Wildes that spins out of control. Suddenly, it is one mom’s word against the other’s in a court of public opinion that can end only in blood.

A riveting and ruthless portrayal of American suburbia, Good Neighbors excavates the perils and betrayals of motherhood and friendships and the dangerous clash between social hierarchy, childhood trauma, and fear.

Sarah Langan, a Columbia MFA graduate and three-time recipient of the Bram Stoker Award, is the author of three novels including THE KEEPER. She grew up on Long Island and she currently lives in Los Angeles with her husband and daughters. Find out more at SarahLangan.com.

Grady Hendrix is a novelist and screenwriter based in New York City. He is the author of HORRORSTOR, MY BEST FRIEND'S EXORCISM, PAPERBACKS FROM HELL, and WE SOLD OUR SOULS, all of which received critical praise from outlets including NPR, the Washington Post, the Wall Street Journal, Los Angeles Times, the A.V. Club, Paste, Buzzfeed, and more. He has contributed to Playboy, The Village Voice, and Variety.