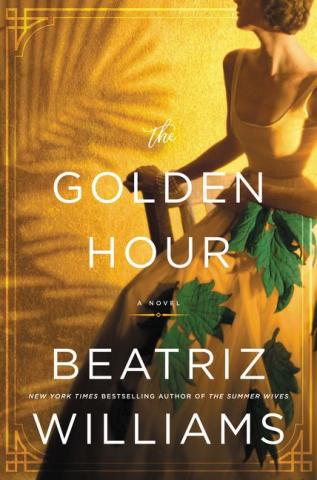 Lit & Libations is a new series that works like this: Novel will bring in amazing authors like Beatriz Williams and Libro will pair 'em with themed cocktail and small plate specials at happy hour prices. Now here's where you come in. All you have to do is bring your friends, grab a cocktail & app from the bar, and head into the event space for a night of entertainment. You in?

The New York Times bestselling author of The Summer Wives and A Certain Age creates a dazzling epic of World War II-era Nassau--a hotbed of spies, traitors, and the most infamous couple of the age, the Duke and Duchess of Windsor.

The Bahamas, 1941. Newly-widowed Leonora "Lulu" Randolph arrives in Nassau to investigate the Governor and his wife for a New York society magazine. After all, American readers have an insatiable appetite for news of the Duke and Duchess of Windsor, that glamorous couple whose love affair nearly brought the British monarchy to its knees five years earlier. What more intriguing backdrop for their romance than a wartime Caribbean paradise, a colonial playground for kingpins of ill-gotten empires? Or so Lulu imagines. But as she infiltrates the Duke and Duchess's social circle, and the powerful cabal that controls the islands' political and financial affairs, she uncovers evidence that beneath the glister of Wallis and Edward's marriage lies an ugly--and even treasonous--reality. In fact, Windsor-era Nassau seethes with spies, financial swindles, and racial tension, and in the middle of it all stands Benedict Thorpe: a scientist of tremendous charm and murky national loyalties. Inevitably, the willful and wounded Lulu falls in love. Then Nassau's wealthiest man is murdered in one of the most notorious cases of the century, and the resulting coverup reeks of royal privilege. Benedict Thorpe disappears without a trace, and Lulu embarks on a journey to London and beyond to unpick Thorpe's complicated family history: a fateful love affair, a wartime tragedy, and a mother from whom all joy is stolen.

The stories of two unforgettable women thread together in this extraordinary epic of espionage, sacrifice, human love, and human courage, set against a shocking true crime . . . and the rise and fall of a legendary royal couple.

A graduate of Stanford University with an MBA from Columbia, Beatriz Williams spent several years in New York and London hiding her early attempts at fiction, first on company laptops as a communications strategy consultant, and then as an at-home producer of small persons, before her career as a writer took off. She lives with her husband and four children near the Connecticut shore.

The Golden Hour: A Novel (Hardcover)