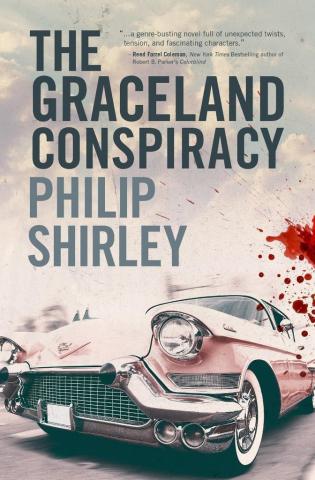 The Graceland Conspiracy delivers a coming-of-age story wrapped in a crime thriller. A rebellious young man becomes caught in a 1990s conspiracy in which the government will stop at nothing to prevent the release of sensitive information about a 1970s crime that could still bring down many powerful government figures and rewrite American pop-culture history.

Matt Boykin had left Birmingham as a young college student and had gained seven years of street savvy working blue collar jobs on the West Coast and Texas. Then one night, a stranger in a suit helps Matt out of a tight spot in a Texas bar fight and whisks Matt away. The stranger hands Matt a card and tells him to call home. Matt’s father is in a coma and near death. Estranged all those years from family and friends, Matt arrives home a different person. His father dies soon after Matt’s return but not before whispering clues for Matt to locate evidence that will later reveal the truth behind the death of an American music icon. When Matt comes home from the store and discovers his mother’s staged suicide, he suspects both deaths were hits.

Matt soon locates the items his father hid for him, and the facts are revealed layer by layer. As a child, Matt thought his father was a low-level clerk in the National Security Enforcement Organization, but that story had been a cover. As Matt draws closer to the truth, an old school friend helping Matt is murdered, and Matt barely escapes. When government agents close to the case die, Matt is blamed for their deaths.

With nowhere else to turn, Matt pairs up with former high school girlfriend Kristine who soon discovers her reunion with Matt has irrevocably altered her life. Using his street savvy, Matt drags Kristine first to Mexico, then to Belgium and Germany, and finally to Venice where the couple is tracked down. They escape death when a powerful new ally takes them into deep cover. Not realizing an enemy is among them, the couple struggles to regain control of their lives by exposing the truth about what really happened to America’s most beloved entertainer.

Mississippi writer Philip Shirley was born in Alabama and has lived in Texas and Florida. He currently resides on Barnett Reservoir in Mississippi near Madison with his wife, painter Virginia Shirley. He has published more than 100 works, including a novel called The White Lie and a collection of short literary fiction entitled Oh Don’t You Cry For Me. He has also written two books of poetry; and with author David Magee, a non-fiction work about professional baseball and its relationship to the Louisville Slugger called Sweet Spot: 125 Years of Baseball and the Louisville Slugger.

Shirley’s book Oh Don’t You Cry for Me was a finalist for the Jefferson Prize. He has received numerous awards for his fiction, speech writing, poetry and feature writing. He was a contributing author of Opportunity in Adversity: How Colleges Succeed in Hard Times, and has been published in Stories from the Blue Moon Café, an anthology of short stories edited by Mississippian Sonny Brewer. In addition to his writing, Shirley is also CEO of the ad agency GodwinGroup in Jackson, Mississippi.

Shirley was the keynote speaker at the 10th Anniversary Conference of the Mississippi Writer’s Guild in 2016 in Natchez.