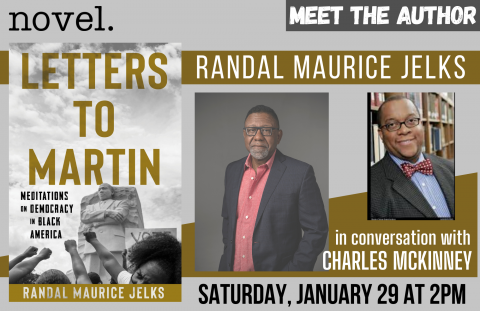 author and Chair of Africana Studies at Rhodes College

to celebrate the publication of

LETTERS TO MARTIN : MEDITATIONS ON DEMOCRACY IN BLACK AMERICA

“Offering a beautiful meditation on freedom of the self and self-governance as sacred realities, Jelks communes with Martin Luther King Jr., capturing in compelling detail how King’s moral and political vision remains still vital as a guide for the transformative work that falls to us to do.” —Danielle S. Allen, author of Our Declaration: A Reading of the Declaration of Independence in Defense of Equality

You’ll find hope in these pages.” — Jonathan Eig, author of Ali: A Life

Letters to Martin contains twelve meditations on contemporary political struggles for our oxygen-deprived society. Evoking Martin Luther King Jr.’s Letter from a Birmingham Jail, these meditations, written in the form of letters to King, speak specifically to the many public issues we presently confront in the United States — economic inequality, freedom of assembly, police brutality, ongoing social class conflicts, and geopolitics. Award-winning author Randal Maurice Jelks invites readers to reflect on U.S. history by centering on questions of democracy that we must grapple with as a society. Hearkening to the era when James Baldwin, Dorothy Day, Reinhold Niebuhr, and Richard Wright used their writing to address the internal and external conflicts that the United States faced, this book is a contemporary revival of the literary tradition of meditative social analysis. These meditations on democracy provide spiritual oxygen to help readers endure the struggles of rebranding, rebuilding, and reforming our democratic institutions so that we can all breathe.

Jelks was an executive producer of the documentary I, Too, Sing America: Langston Hughes Unfurled and he currently teaches American Studies, African Studies, and African American Studies at the University of Kansas. His writings have appeared in the Boston Review and the Los Angeles Review of Books, and he also serves as co-editor of the academic journal American Studies.

CHARLES W. MCKINNEY, JR is The Neville Frierson Bryan Chair of Africana Studies and an Associate Professor of history at Rhodes College in Memphis. His areas of expertise are the Civil Rights/Black Power Era, African American Activism, and African American Politics. He received a bachelor’s degree in history from Morehouse College and completed his doctoral studies at Duke University. His first book was titled Greater Freedom: The Evolution of the Civil Rights Struggle in Wilson, North Carolina. His second project, co-edited with Aram Goudsouzian, is An Unseen Light: Black Struggles for Freedom in Memphis, Tennessee. He is currently working on two projects, the first tentatively titled George Lee’s World: Race, Power and the (After)life of Segregation; the second book, co-edited with Francoise Hamlin, titled Rights and Lives: An Exploration of the Civil Rights and Black Lives Matter Movements, is under contract at Vanderbilt University Press.

His writing has appeared in newspapers and information venues across the country, including the Memphis Commercial Appeal,USA Today, Wall Street Journal, Black Perspectives, Vanity Fair, and MLK50: Justice Through Journalism. He has provided commentary on radio programs across the country, news outlets in the United Kingdom, Europe, China, New Zealand, Australia, and has appeared on CNN.

Letters to Martin: Meditations on Democracy in Black America (Hardcover)