Writing & Religion: A Conversation with Sonja Livingston and Susan Cushman 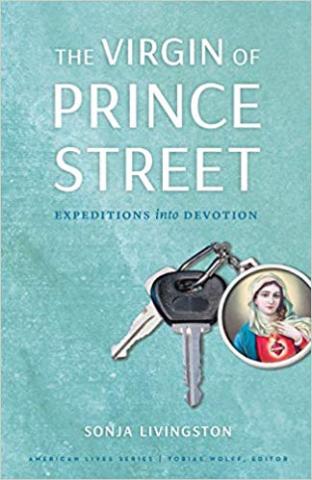 About The Virgin of Prince Street: Expeditions into Devotion:

With organized religion becoming increasingly divisive and politicized and Americans abandoning their pews in droves, it's easy to question aspects of traditional spirituality and devotion. In response to this shifting landscape, Sonja Livingston undertakes a variety of expeditions--from a mobile confessional in Cajun Country to a eucharistic procession in Galway, Ireland, to the Death and Marigolds Parade in Albuquerque, New Mexico, and Mass in a county jail on Thanksgiving Day--to better understand devotion in her own life.

The Virgin of Prince Street chronicles her quest, offering an intimate and unusually candid view into Livingston's relationship with the swiftly changing Catholic Church and into her own changing heart. Ultimately, Livingston's meditations on quirky rituals and fading traditions thoughtfully and dynamically interrogate traditional elements of sacramental devotion, especially as they relate to concepts of religion, relationships, and the sacred.

Sonja Livingston is an associate professor of English at Virginia Commonwealth University. Her essays are widely anthologized and taught in classrooms around the country. She is the award-winning author of Ghostbread, Ladies Night at the Dreamland, and Queen of the Fall (Nebraska, 2015).

Susan Cushman, Memphis, Tennessee, was co-director of the 2013 and 2010 Creative Nonfiction Conferences in Oxford, Mississippi, and director of the Memphis Creative Nonfiction Workshop in 2011. She is author of Friends of the Library and Cherry Bomb and editor of Southern Writers on Writing and A Second Blooming: Becoming the Women We Are Meant to Be. Her first published essay appeared in Circling Faith: Southern Women on Spirituality (2012).