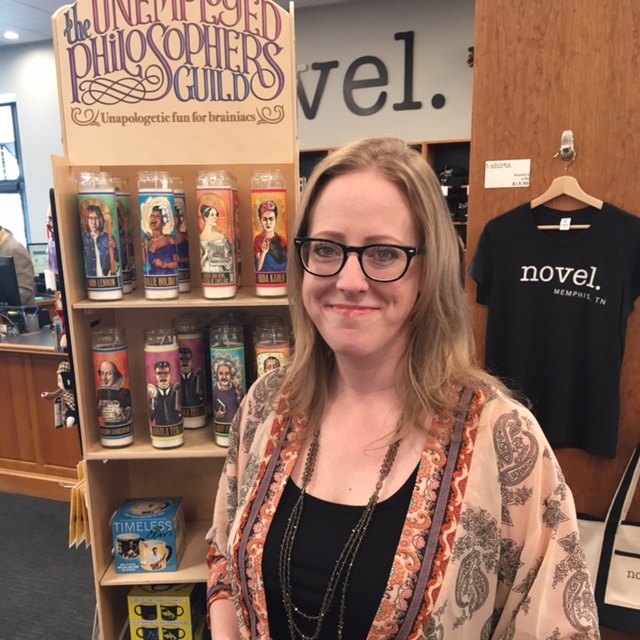 Marketing Manager
In the book business since 1998

Nicole came to Davis-Kidd as a bookseller at the age of 19, and immediately knew she had found her people. Her journey led her to pursue a brief stint as a store manager at a national chain store at the mall full of earrings and tchotckes, and while she eventually became a PRO at ear-piercing, she knew her heart belonged to bookselling. When she returned to Davis-Kidd, she ended up in the Children's Department, and was Children's Manager for 13 years. The next wave of her bookselling career was to become Marketing Manager for The Booksellers at Laurelwood, and now, at Novel, she is thrilled to reprise her role as Marketing Manager.

Things that can be found on and around her desk:

E. T. Figurine - nobody knows where he came from, he just showed up the other day.

A dinosaur in a bowtie. And one in a tutu. They're probably going on a date, but that's none of her business.

A giant container of Laffy Taffy to share, but only if you promise to read the joke aloud.

A mug with a quote that always makes her emotional and keeps her going, even on the most tiring days:

"We forget that the simple gesture of putting a book in someone's hands can change a life. I want to remind you that it can. I want to thank you because it did." ~Kate DiCamillo

I Love Myself: When I Am Laughing...and Then Again When I Am Looking Mean and Impressive (Paperback)

Symphony for the City of the Dead: Dmitri Shostakovich and the Siege of Leningrad (Paperback)

The Girls: A Novel (Paperback)